If you’re a Calgarian, then you know that there is one major seasonal event that the zoo hosts every winter. That’s right, it’s almost time for ZOOLIGHTS!

Calgary’s favourite holiday tradition is back (running from November 25, 2016- January 8, 2017), and with it comes 1.5 million LED lights, activities, and memories to be made.

With all of those twinkling lights, what is it like getting ready for this big event? We caught up with Aaron Cunningham and Kelsey Van Raay, two employees with the ZOOLIGHTS know-how.

ZOOLIGHTS is a huge event. Visitors always ask ‘what does the preparation process look like?’

Aaron Cunningham has worked for the zoo for fifteen years, and has the inside scoop working with these lights. The zoo uses LED lights so we conserve as much power as possible, and some of the energy comes from our own on-site generators so we don’t stress the city’s power grid.

Aaron notes that the most time consuming task is wrapping the trees in lights; especially the big ones. A lift is used to reach as high as 60 ft in the air to wrap the lights all of the way up the trunk and the main thick branches- it’s very time consuming. There are also figures to set up that are staked into or hung from different structures. Visitors are walking by sparkling animals, lollipops, glittering trees, both static and animated figures to marvel at!

So how long does it take to turn the grounds into a sparking winter wonderland? It takes a team of five ZooReady employees three months to physically prepare the lights. With three months of prep and another three of tear down- the event basically takes up seven months in the year! Employees in Marketing, Communications and other departments are also racing to make it the best event it can be.

Set up begins after labour day when there are fewer crowds, and the crew works right until the opening date. Challenges arise if the weather doesn’t cooperate- as we were reminded in years past, it’s difficult to string lights on a tree with both full leaves AND snow! This year has a particularly unique challenge, as it was the second year of ILLUMINASIA. Lantern artists were removing the Chinese lanterns while our staff were trying to hang the lights for the next big event.

So after this many years of working ZOOLIGHTS, what is the best part for Aaron?

“I look forwards to the people that come down and enjoy, and get swept up in the season and the tradition we create. Every year there are proposals. Basically, you get to see people building their own traditions, while enjoying a classic Calgary tradition at the zoo.” 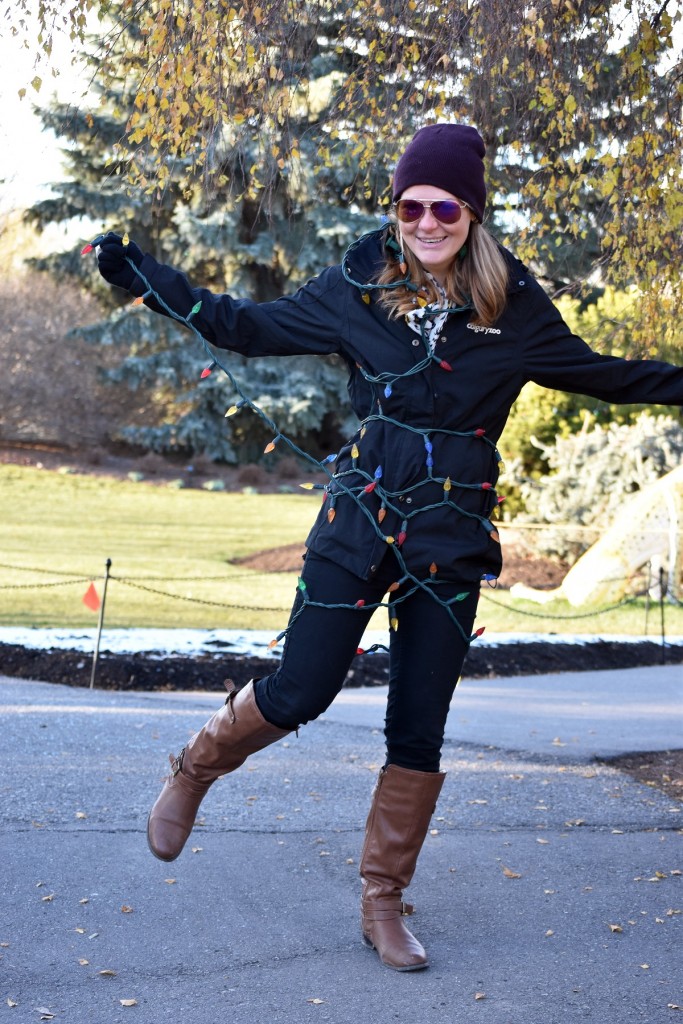 Kelsey Van Raay gets wrapped up in planning this year’s ZOOLIGHTS.

Kelsey Van Raay, on the other hand, is still learning the inner workings of the ZOOLIGHTS event. This Special Events Assistant not only moved to Calgary in 2015, but as of last year, she had never been to the winter tradition that is ZOOLIGHTS. Not only was she adjusting to the city during the winter and the traditions that the event represents, but she was adjusting to creating the event itself.

Kelsey admits that, “The biggest challenge is trying to create something entirely new within a festival that has been around for 19 years ” Each year of ZOOLIGHTS has a classic element and includes the traditional lights, but also gets switched up in order to keep it fresh for the new year.

So far she’s been communicating a lot with the outside vendors. It’s her job to bring in the new elements, and work side-by-side with event planner, Roz Freeman, to decide the coolest new activity to feature. Kelsey knows that she is bringing new ideas to help grow the event, “Now that I have worked a year of ZOOLIGHTS, I have a better idea of which elements of the festival are the most special to our guests. Visiting Santa and the skating rink are two big ones!”

Last year she experienced the rite of passage that is going up in the lift for ZOOLIGHTS. “After you’re trained, everyone goes up in the tall lift to hang lights at least once while working ZOOLIGHTS, and it can go up to 60 ft high. This year, I am learning about the other challenges of festival production such as the drastic weather changes and the effects it can have on setting up.”

Once she conquers the lift, she’ll be all excitement. “I’m really looking forward to my second year of ZOOLIGHTS and can’t wait to see everyone’s hard work come together!”

This year’s ZOOLIGHTS run from November 25, 2016- January 8, 2017. Tickets can be purchased at the North Gate, or skip the line and purchase them in advance.