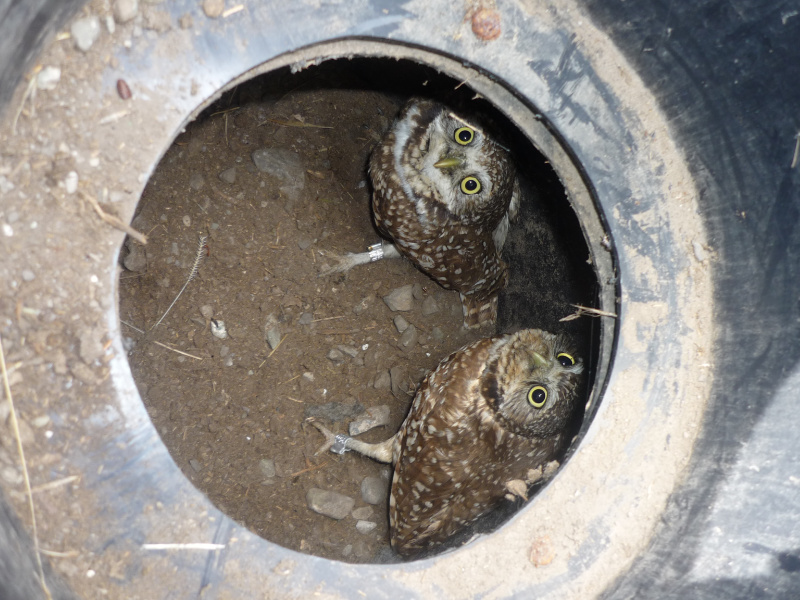 Today we are delighted to share an exciting advancement for our burrowing owl conservation project. Working with the Department of National Defense and Environment and Climate Change Canada, we released burrowing owls to the wildlife conservation area on CFB Suffield.

Underground within a wildlife conservation area on Canadian Forces Base (CFB) Suffield lives a very rare species that’s getting a head start in their new home with the help of scientists and soldiers. A head-starting project for burrowing owls, an endangered species within Canada, achieved a milestone this spring with the release of eight adult owls into the CFB Suffield National Wildlife Area.

There may be as few as 400 female/male pairs of burrowing owls remaining in the country, according to population estimates from Environment and Climate Change Canada (ECCC). The burrowing owl head-starting process began in 2016 when owlets were taken from the Base and surrounding lands as part of a conservation program in partnership with the Calgary Zoo and ECCC.

“One of the most unique aspects of this project is the collaboration between Canadian Armed Forces members and environmental experts from so many agencies. CFB Suffield is honoured to support Environment and Climate Change Canada and the Calgary Zoo with this ground-breaking project by providing access to the habitat within the CFB Suffield National Wildlife Area and providing logistical support.” Danny Laganière, Base Environmental Officer, CFB Suffield

“Endangered species like burrowing owls need our help, and they need it now. Novel partnerships can be extremely powerful to enable science and trigger decisive action. Who would think that the Calgary Zoo would be working with the Department of National Defence, as well as Environment and Climate Change Canada, to help save species? Indeed, we now literally stand shoulder to shoulder releasing burrowing owls into the wild. We are so proud to work together to restore this precious part of our Canadian natural heritage.” Dr. Axel Moehrenschlager, Director of Conservation & Science, Calgary Zoo