Sheldon is a leopard  tortoise and is over 22 years of age (unknown birthdate as he was a rescue). He came to the zoo in 1993 and with volunteer assistance he has been strolling alongside our visitors and members for over 15 years now.

Sheldon is regularly walked by the volunteers during the week outside (or in the building in the winter). You might think walking a tortoise is a painfully slow way to spend a morning, but Shirley Servis, long-time volunteer with the Calgary Zoo, says that’s simply not so. Every Thursday morning – rain or shine – you will find Shirley inside or outside the TransAlta Rainforest with Sheldon, a leopard tortoise, as her companion. 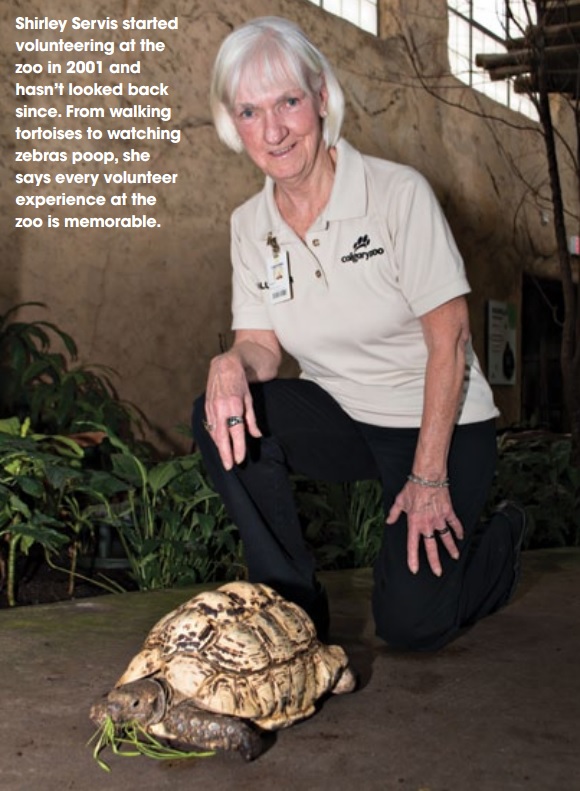 “I like to say that Sheldon is solar powered – he’s a lot more active in the summer than he is in the winter – but he needs his exercise and walking him is a great teaching opportunity,” says Shirley who spends her hour with Sheldon explaining the difference between a turtle and a tortoise, emphasizing the importance of making responsible pet choices and talking about the zoo’s conservation work.

Leopard tortoises are named for the spots that they have on their shells that are most apparent and vibrant when they are young. Their shells are highly domed to reflect as much of the sun’s rays away during the hottest parts of the day.

Come down and take a stroll with Sheldon or come visit him in his outdoor enclosure located in the middle of the outdoor mandrill loop in the TransAlta Rainforest.