Skoki, the zoo’s male grizzly, came to the zoo as a rescue bear. Today, he inspires zoo visitors with his awesome presence, big personality and sad story.

A Grizzly’s Journey from Wild Bear to Rescue Bear

Rescue bear, problem bear, and victim bear are often used interchangeably to describe black and grizzly bears that have come into conflict with humans. These animals are indeed the victims of of human behaviours – like leaving food out, littering, or stopping to take the perfect selfie. Bears are simply food-motivated, always on the lookout for an easy meal, not trouble.

Bears are all about eating. In just a little more than seven months, they need to consume enough food to sustain them during their long winter hibernation. So, when summer is waning or natural food is hard to find, bears are obsessed by their need to eat. When in a hurry, bears, like humans, will choose the easy meal, especially when people provide bear “fast food” in the form of discarded human food, garbage and spilled grain from railcars. Irresistible to bears, these equivalents of a bear drive-thru can have disastrous and often deadly consequences.

Skoki, a grizzly bear at the Calgary Zoo, is just one of six rescue bears to have found refuge at the zoo since 1966. The reason that Skoki was brought to us was because of his consistent close proximity to humans and human populations.

Skoki is a “lost bear.” He is a Rocky Mountain grizzly and spent his first years learning the ropes from his mom in the wild. Once old enough, he set out to fend for himself. First known as Bear #16, he spent the summer of 1993 grazing in the lower Bow Valley. He learned to successfully navigate towns, highways and railway tracks in search of dandelions and berries to eat, but his presence regularly stopped traffic. After all, he was a handsome young bear and provided a great photo opportunity.

At first, Skoki wasn’t interested in people or their food. Parks Canada conservation officers, researchers and volunteers tried hard to keep it that way. They made efforts to protect him – fitting him with a radio collar, monitoring his movements and even using rubber bullets and cracker shells in an effort to try to make him associate discomfort with human presence. It seemed to work, allowing Bear #16 to remained relatively indifferent to humans, moving slowly away if they got too close.

Bear Jams are No Picnic

Over the next few summers, Bear #16 frequently fed along the edge of the highway. Thousands of people stopped to look at him, often forming “bear jams.” Not surprisingly, at some point Bear #16 was introduced to discarded human food. He discovered that people were no threat and connected their presence with an easy meal. As people became bolder around him, Bear #16 became bolder around them and began defending his personal space.

During the spring and early summer of 1996, he sometimes passed through the campground at Lake Louise, one night tripping on and tearing a tent, frightening the occupants. Easy meals became more and more appealing and Bear #16 became increasingly reliant on human food, bolder around people and eventually bluff-charged two vehicles.

Park conservation officers continued to try to teach Bear #16 to avoid humans, but he was so comfortable around people that he couldn’t go back to his wild ways. In June 1996, Bear #16 was relocated to the backcountry, but within a few days he returned to his home in the Bow Valley. He survived for a short time without conflict, but there were so many people in the valley it became dangerous to allow him to roam so close to humans because of the potential hazard of encountering a human on foot.

As it became clear that Bear #16 would always find his way back to human settlements, the decision was made to relocate him to the Calgary Zoo, for the safety of both human and bear alike.

From Wild Bear to Rescue Bear 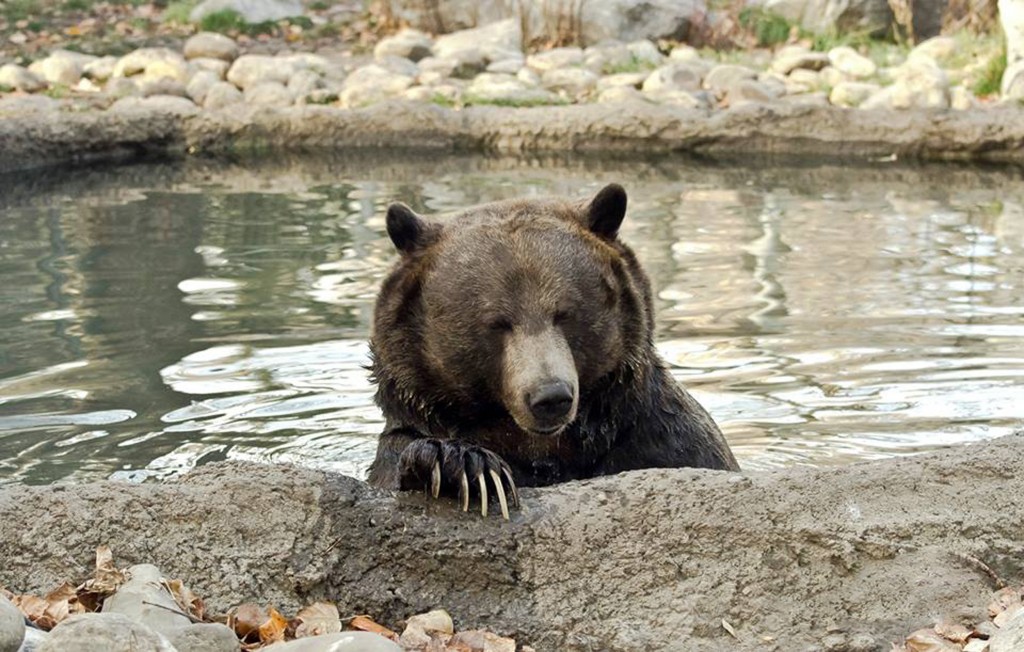 When Bear #16 arrived at the zoo he quickly associated his keepers with food and care, as he had in the wild. He was just reaching maturity and on the verge of becoming a breeding male. Renamed “Skoki,” this beautiful bear never had the chance to reproduce and his genetics are forever lost to the wild grizzly population.

However, Skoki’s life still has meaning. For 23 years he has inspired zoo visitors with his awesome presence, big personality and sad story. His example is a sobering reminder of the devastating effects careless human actions can have on wildlife. Had Skoki not become acclimated to humans, had he not acquired a taste for human food, he might have stayed in the wild.

As members of the Calgary Zoo you can share Skoki’s story with others and be Bear Aware to help all bears stay wild. Never feed a bear or leave garbage out for them to find. Never approach a bear and always give them lots of space so they can feed, travel and find mates.

To learn more about how you can become Bear Aware, avoid human-bear conflicts and keep bears in the wild, visit bearsmart.com.