Since 1979, Rick has been making the zoo a better place, when he was first hired as a labourer. Always interested in animals, Rick moved from Ontario to Calgary and began working for the Calgary Humane Society. Once he transitioned to the zoo, he quickly rose from a labourer to an apprentice, and his zoo career took off. After almost a decade of working on St. Patrick’s island, in 1988 he made the move to the Devonian Wildlife Conservation Center (DWCC) near De Winton to continue his zookeeping work – with a new conservation focus.

Spending so much time out at the DWCC, Rick decided to move and live there on-site. Always on grounds, his position and those of his colleagues are different that of zookeepers on-site in the city.

“There is a really unique set of skills that are required to work out here. You have to be comfortable working alone, driving heavy equipment, and operating that equipment in the winter. The staff out here are incredible- I call them my thoroughbreds.” 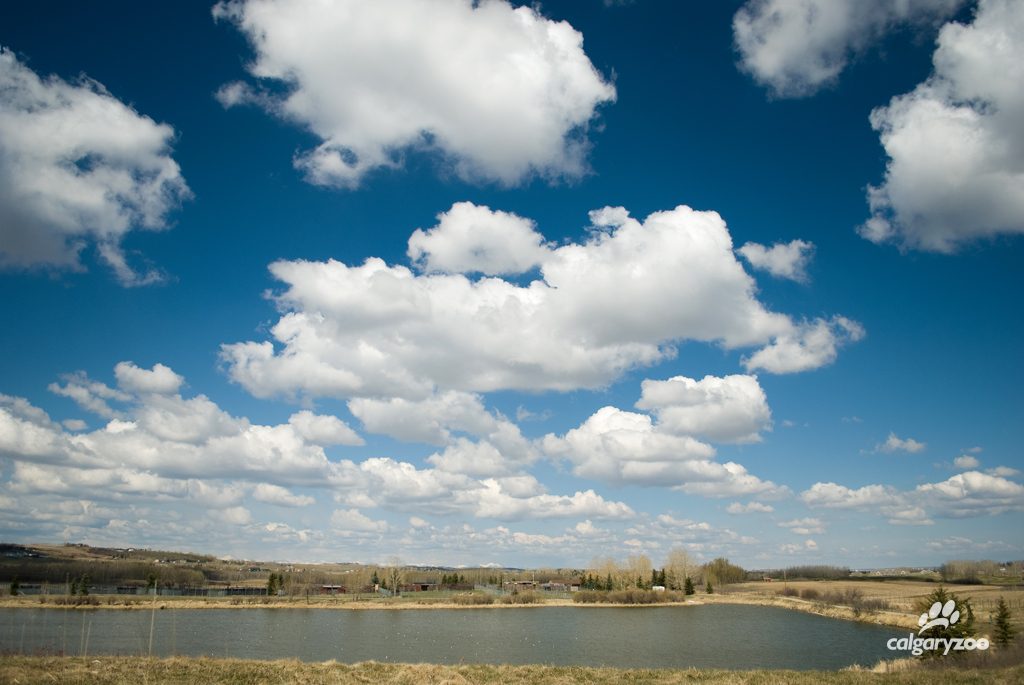 The Devonian Wildlife Conservation Center is half a square mile or 320 acres, including a 30 acre pond that is a hotspot for frogs and migratory birds. This big space was originally used for accredited breeding of hoof stock like moose and dahl sheep, and he estimates that most of those animals found in facilities in North America and Europe are descendants from Calgary Zoo animals. The DWCC transitioned from that practice to caring for specific endangered species, like the iconic whooping crane in the early 1990’s.

After starting with cranes, the DWCC has taken on caring for Vancouver Island marmots, Przewalski’s wild horses, as well as begun a head start burrowing owl program. The focus with most of these species is reintroduction- caring for animals in order to return them to the wild and bolster those natural populations. When the zoo started helping with the Vancouver Island marmots there were fewer than 50 left, and now the species is up to 400 in number!

One of the Calgary Zoo’s key conservation species through their reintroduction work is the Vancouver Island marmot.

Rick says he really enjoys the work with these endangered species, as he feels he personally makes a difference. “Many endangered species often have no release program, as their native habitats can no longer sustain them.”

To him, this emphasizes the important work being done and why zoos should continue to prioritize their conservation efforts.

A story that Rick shares, highlights the zoo’s impact on the Vancouver Island marmot population.

“On a visit to Vancouver Island for the program, I had the chance to hike up to Haley Lake Basin to see the marmot habitat. I was standing on a ridge, glaciers and the ocean on either side of me, and with binoculars I was able to watch families of the Vancouver Island marmots. Knowing that those marmots were descendants of our Calgary Zoo marmots was a big moment.” 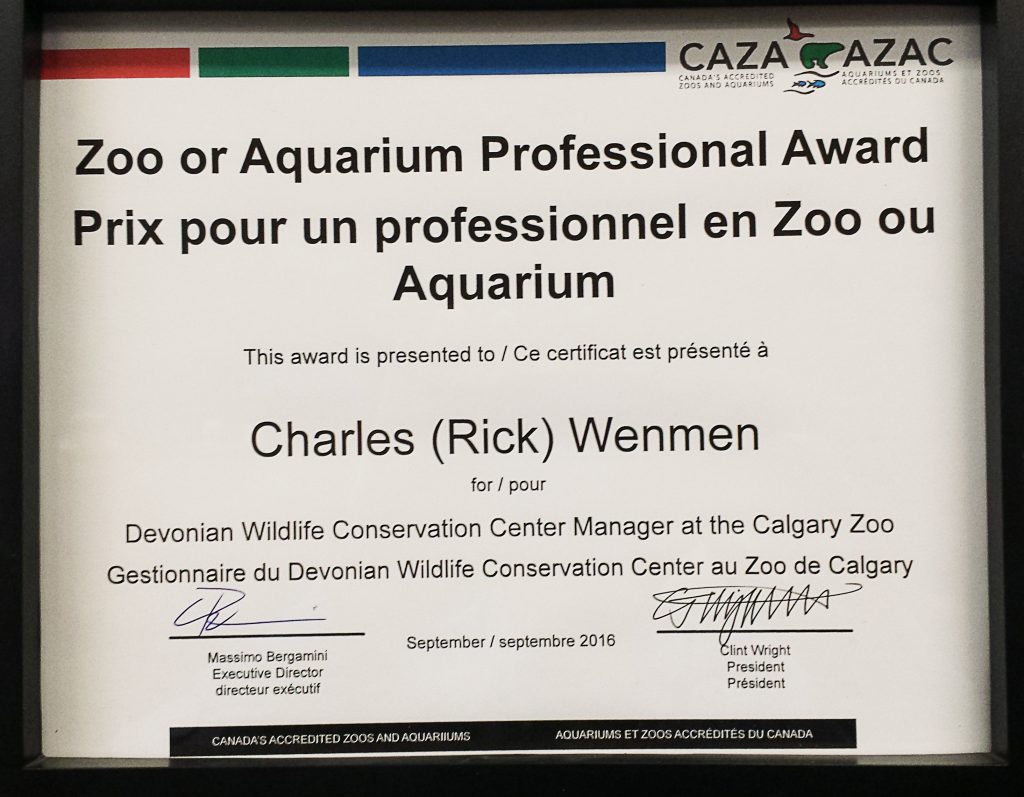 The Zoo or Aquarium Professional Award given to Rick Wenmen from CAZA.

He recently retired from his Lead Zookeeper position at the DWCC, but Rick couldn’t quite let it go- he remained as the DWCC Supervisor, and continues living on-site. When you ask him, he laughs and says that he fell into working with animals, but [he] loves it. “I wouldn’t want a ‘real’ job.” 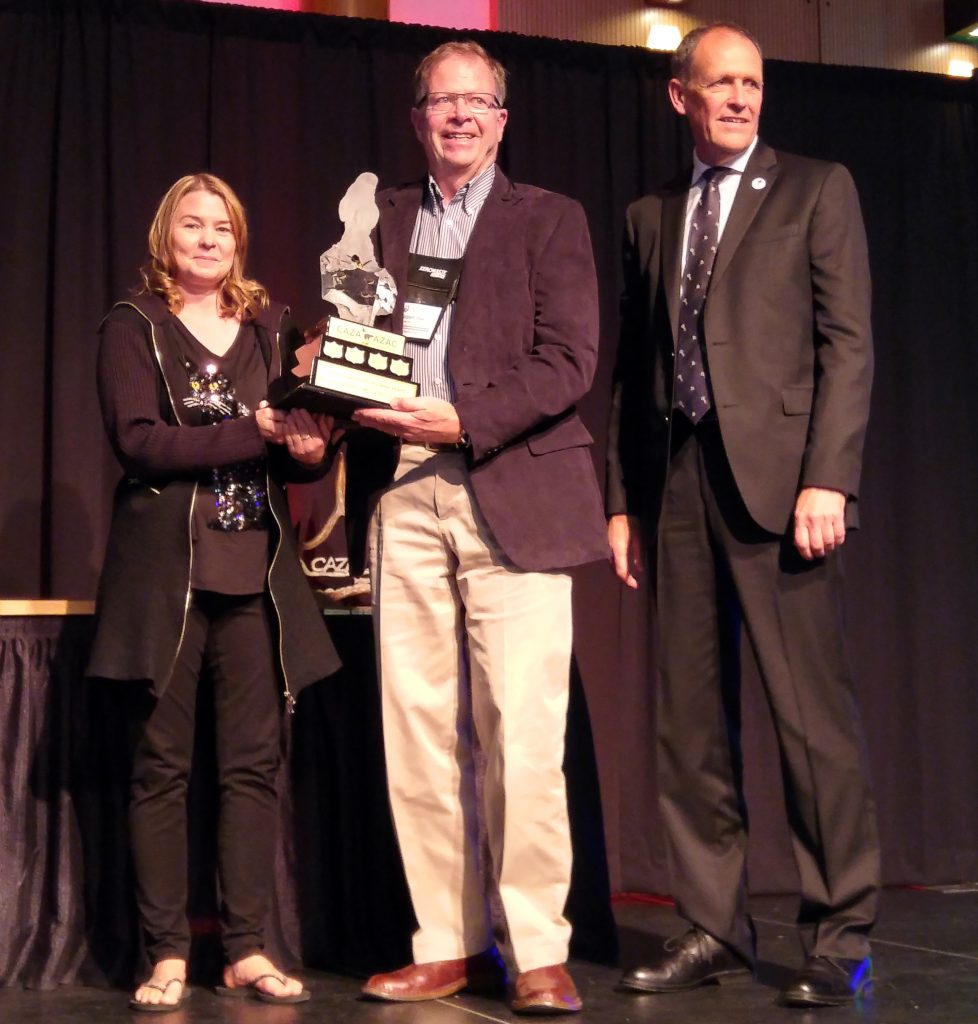 So how does it feel? “This award is a complete surprise! Being out at the DWCC, I often feel like I’m a little hidden away. It’s so nice to get the recognition of your peers.”

Learn more about the zoo’s conservation work here and meet other amazing zookeepers in our yearly Zookeeper Week series.