After months of waiting, the Calgary Zoo is thrilled to announce that we have a new baby western lowland gorilla!

—-
Please note: We ask for your patience and understanding as we allow Kioja and her baby the time to bond. The TransAlta Rainforest building will reopen to visitors in the week of March 14, 2016.
—-

New mom Kioja went into labor in the evening of Wednesday, March 9, and gave birth at approximately 9:30 p.m. With our staff keeping a 24-hour watch on the proceedings, we are pleased to say that so far Kioja has been showing consistent signs of being a great mother. After giving birth she immediately scooped up her new little one and has been carrying the baby with her as she moves about her habitat, resting with it on her chest. The zookeepers were heartened to see signs of the baby nursing, as well as Kioja showing it affection and checking on it consistently. 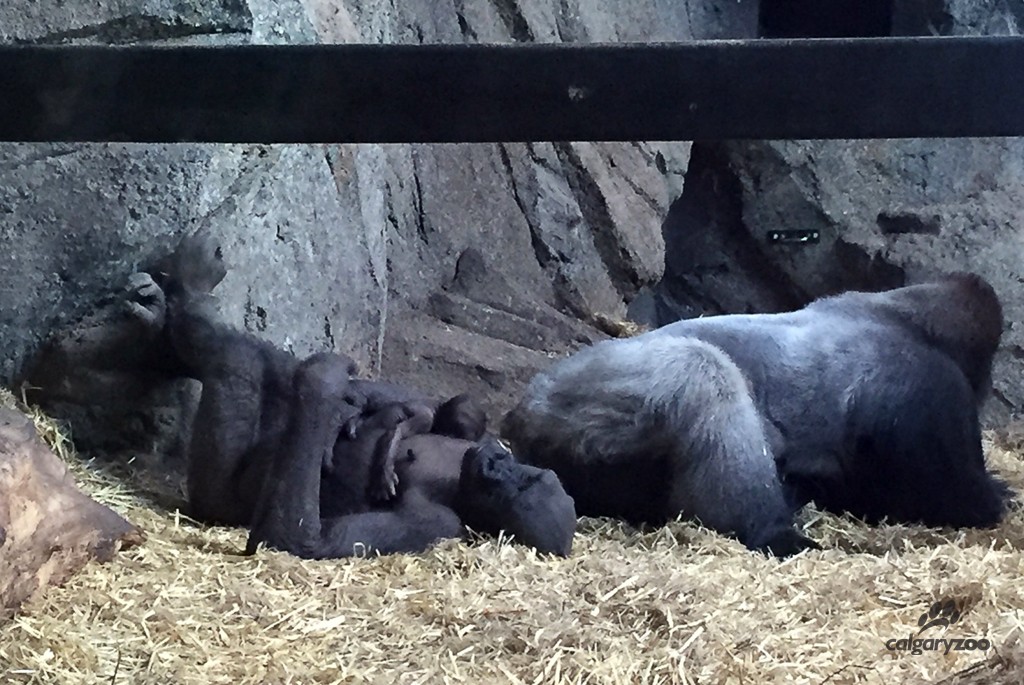 Kioja isn’t the only one taking a rest- father Kakinga relaxes by the new mother and keeps a watchful eye on their new baby.

While the animal care staff here at the zoo are always cautiously optimistic when a baby animal is still so young, they are encouraged by the behaviors that they have noted so far. Monitoring Kioja and her new baby isn’t the only job to do, as it is important to watch for behaviors within the whole troop as they adjust to the new addition. The gorilla family has been curious and coming close to get a glimpse of the baby, but have been maintaining a respectful space- which is encouraged by father and silverback Kakinga’s protective behavior.

So protective in fact, that zookeepers won’t know the sex of the baby (at least for sure!) for a few weeks. Unless necessary, the vets prefer not to separate Kioja and the newborn until they have established a routine and are more comfortable with each other and with more people around them.

This is the first gorilla born at the Calgary Zoo since 2008 when the youngest female, Yewande, joined the troop which now consists of 18-year-old Zuri, 15-year-old Dossi and male silverback Kakinga, 37. All of the western lowland gorillas at the zoo are part of the Species Survival Plan (SSP) which maintains genetic diversity in captive populations through breeding recommendations and careful management of the animals.

“Our team has been working very hard towards the arrival of this new baby,” states Dr. Celli. “With fewer than 55 breeding recommendations granted for the captive population, this is a very important addition to our troop as much effort goes into planning for a gorilla pregnancy.” 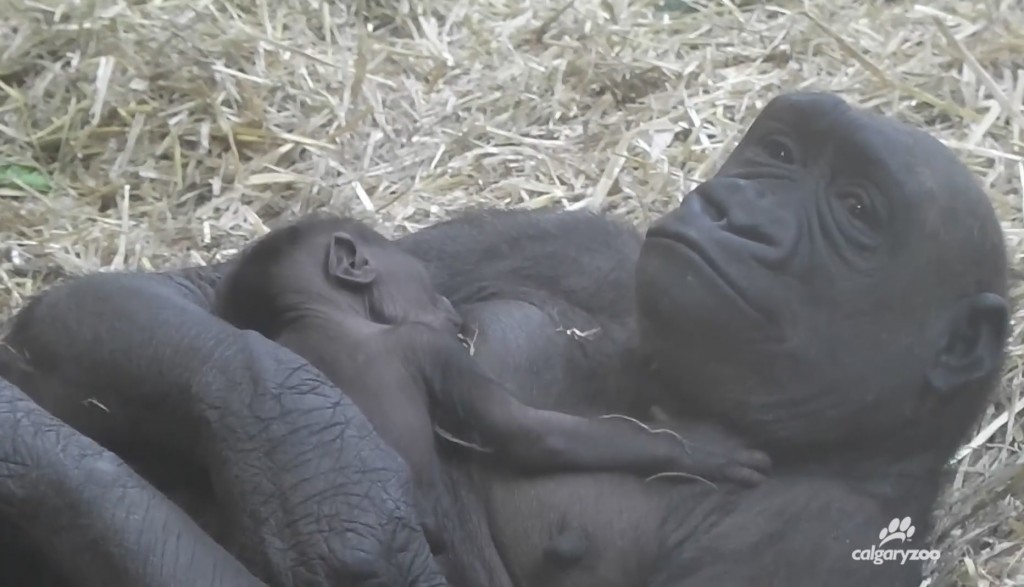 To further help in the conservation of gorillas, the Calgary Zoo is proud to be able to recycle cell phones. In each cell phone is a mineral known as coltan, which is mined in areas where gorillas live. By keeping phones of out landfills, habitat is preserved. Habitat loss is one of the threats gorillas face globally along with high levels of hunting and disease. It is estimated that there are fewer than 100,000 gorillas left in the wild. Recycle your old cell phone with us and help us restore the gorilla habitat!

We know that our zoo fans can’t wait to catch a glimpse of the new baby, but we ask for some patience as mom and baby continue to bond of the next few days. By closing the TransAlta Rainforest building to the public and giving them some quiet time together, we can help the troop adjust to their newest member. Updates coming soon!