It’s National Zoo Keeper Week and we’re sharing the love! To recognize the dedication and hard work of our amazing zookeepers, we are posting an interview of a keeper each day this week. We’re chatting with Ashley, who recently moved from a position as a zoo volunteer to her first zookeeping job!

A:  “I grew up in Calgary, and like many young people in our city, that meant that I spent a lot of time at the Calgary Zoo. The zoo became a place of special significance to me, and I had always known that I wanted a career working with animals someday, so becoming a keeper at the Calgary Zoo seemed like the perfect fit.

I knew that I wanted to work at an institution that prioritized both animal welfare and conservation, which were big reasons that I was drawn to the Calgary Zoo. I earned my Bachelor of Science degree at the University of Calgary; where I studied Zoology, and later went on to earn additional certificates in the Zoo and Aquarium Sciences. While I was attending University I started volunteering at the zoo in various capacities, eventually making my way into an Animal Care volunteer position.

During my time volunteering I had the privilege of working alongside our excellent zookeeper staff, which really solidified my career goals – I knew I wanted to be a part of this amazing team and I feel very honoured to be here now.” 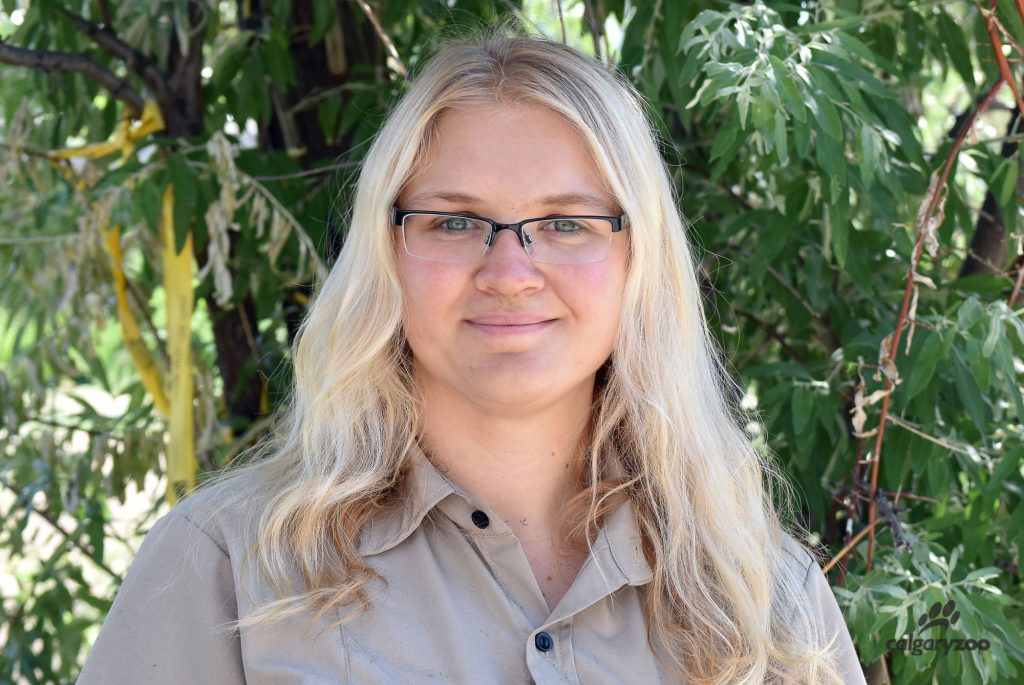 A:  “I was hired as a zookeeper at the Calgary Zoo in the beginning of June, 2017 after several years of volunteering – so I’m still relatively new to my role as an official keeper.”

A: “That’s a hard question to answer, as I’m sure anyone who has been around animals can attest to. Every individual has their own unique personality and I believe you end up loving them all for their own reasons– I think my favourite animal changes every minute of every day. It’s a privilege to have the opportunity to share your life and your work with every animal both big and small, and all of them are deserving of our respect and commitment.

I will say that the giraffes definitely have a special place in my heart – they are such majestic animals and they are so calm and gentle in spite of their size. You just can’t help but feel a little bit awed every time you see them – especially when you find yourself staring at their kneecaps at eye level! I certainly have a soft spot for our young giraffe Moshi; she has a lot of spirit and tends to be quite adventurous. She always seems to be the first of the giraffe clan to check out anything new and exciting.”

A: “When I was still volunteering in Animal Care at the zoo, I participated in a “Happy Birthday” celebration for our female hippo, Sparky.  It was her so-called “champagne birthday” as she was turning thirty-years-old on May 30, 2017. We laid out some special treats for her, including a favourite snack for a hippo (a watermelon), and even spritzed everything with some sparkling apple juice (the “champagne” for her special day).

Sparky loved her birthday treats and we all loved being able to spend that time with her. She really took her time eating the watermelon and slurping up all the juice – I will always be amazed by how dexterous their big lips are (like a giant vacuum cleaner).

We spend so much time with these animals that they really become like family to us, so marking special milestones like animal birthdays is really important, and we always like to do something extra fun for them.  A lot of the zookeeping job isn’t necessarily glamorous – a lot of cleaning – but days like that really stand out and remind me why I chose the career that I did.”