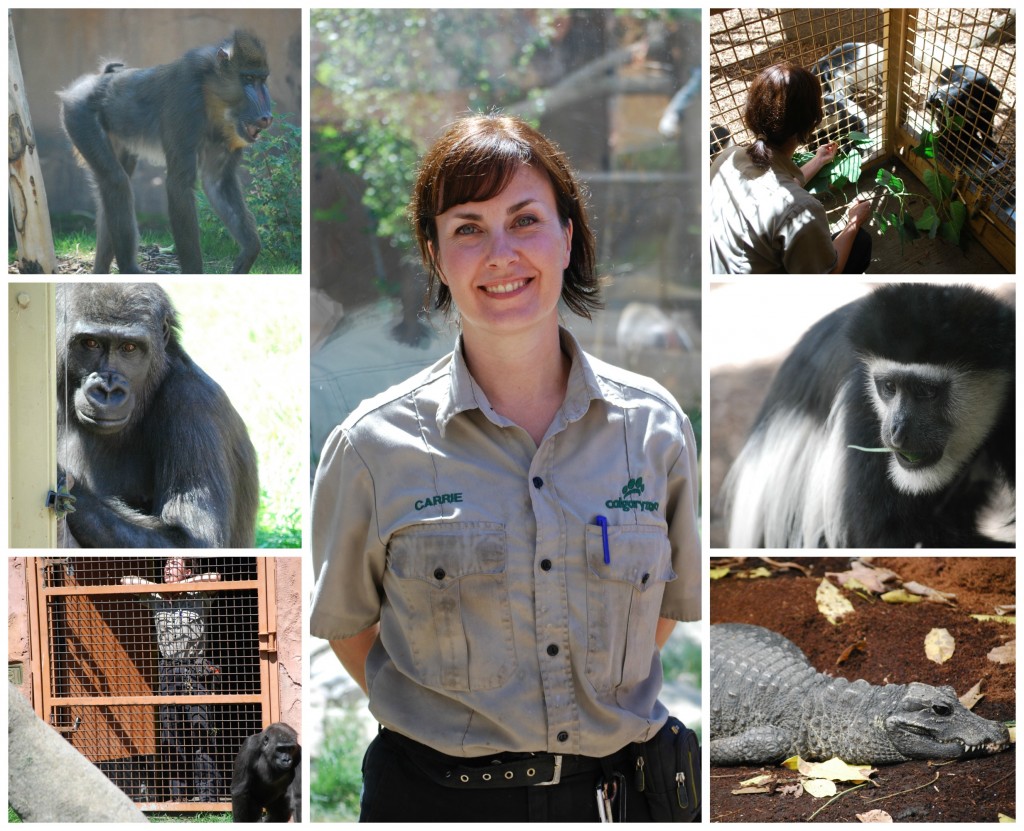 The summer of 2014, we recognized National Zoo Keeper Week! To celebrate the dedication and hard work of our amazing zookeepers, we posted an interview of a keeper each day that week! Our Lead primate keeper told us some heartwarming stories.

A: “I went to the University of Calgary, and was originally interested in Archeology. I took a primatology class, and that was it- I ended up getting my Bachelor of Science for Physical Anthropology with a minor in Archeology.”

A: “I started volunteering for the zoo 17 years ago, and then became a keeper the year after in 1997. I’ve now been a keeper at the Calgary Zoo for 16 years. As all new keepers do, I started off rotating through the different areas of the zoo in order to get experience, and then after 2 years I started working chiefly with the gorillas. I’ve now become the zoo’s Lead Primate keeper.”

A: “I can’t pick a favourite animal, or even a favourite species, but I would say that there is a special spot in my heart for one of our lowland gorillas Zuri. She was born in Cheyenne Mountain Zoo, and then came to us through Toronto Zoo. Zuri was a hand raised gorilla, and it is often difficult for gorillas like her to understand the social structure of the troop, leading to difficulty intergrading with the rest of the gorillas here. I’m so proud of her, as she’s come such a long way. That’s really what I do this for- she’s amazing. Zuri is very serious, but when she laughs or lets loose and gets goofy- that’s such an awesome thing to see.”

Q: What’s your favourite part of being a zookeeper?

A: “Three years ago I traveled with a group of four of our male spider monkeys who went to “Safari Niagara”; a small zoo in Ontario. I went to help the spiders with a period of adjustment but got a huge bonus in going as well. There is a very special little Goffin’s cockatoo named ‘Colonel’ who used to live in the Australia/Nocturnal building before it was emptied. When I started volunteering at the zoo, he was very young and we started a strong bond right from the get-go. I was so focused on getting the spider monkeys to the zoo safely that it slipped my mind entirely that this was the same place that Colonel and several other of our animals had gone years previous.

Once I found out he was there, I saw him in a small cage near the entrance and went right over to him. The keepers let me in with him and he immediately came right over for a snuggle. It was a very special moment for me; keepers always have a few ‘special’ individuals that really affect them over the years and he is one of them for me. I found out later that the keepers were hesitant to let me into the enclosure because he had been a bit ‘nippy’ with most staff! They had to hold their breath as he came right for me! I am happy to report that he now has a girlfriend and is happily living out his years at a lovely institution.”