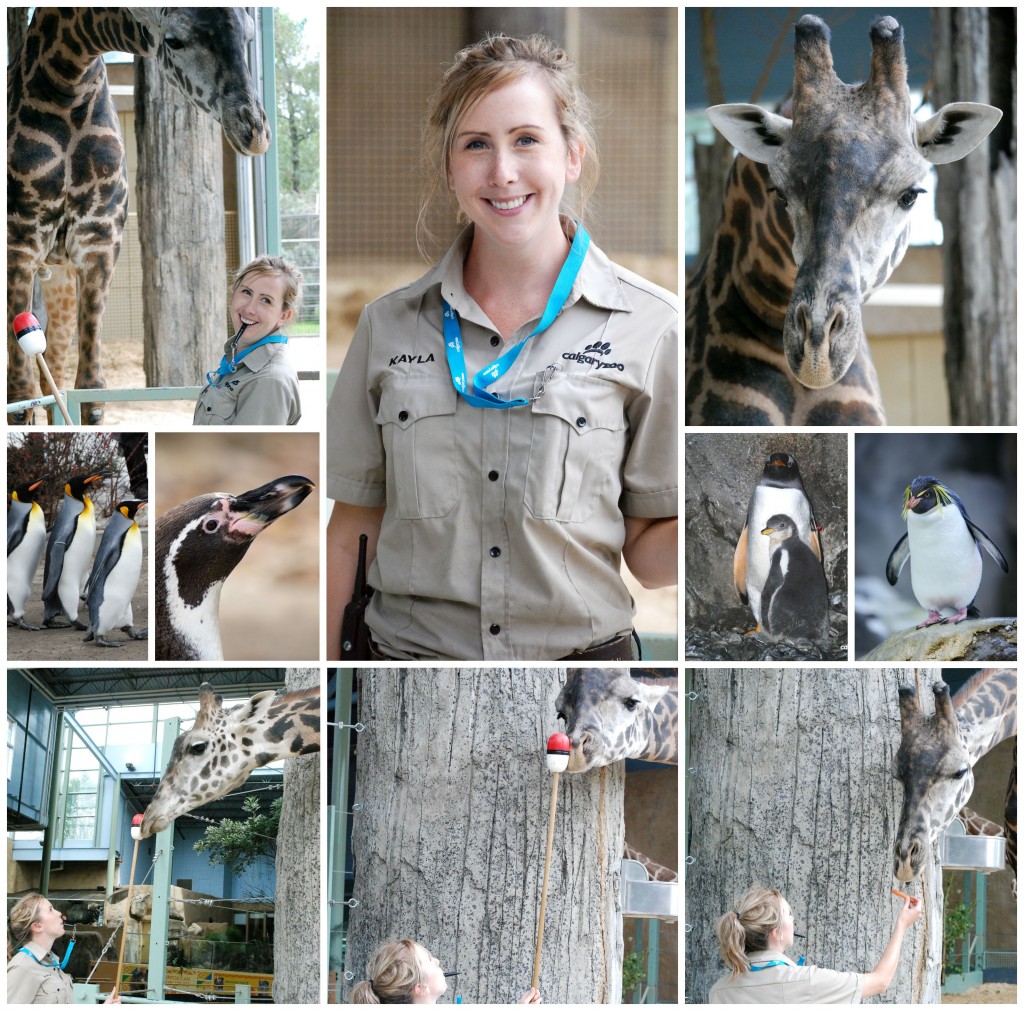 It’s National Zoo Keeper Week and we’re sharing the love! To recognize the dedication and hard work of our amazing zookeepers, we are posting an interview of a keeper each day this week. We caught up with Kayla while she was target training the giraffes, and talked about her passion for penguins, and how lucky she was to witness the first penguin chick hatch at the Calgary Zoo!

A: “I grew up with dogs and cats, but when I was around 11 or 12 years old, I watched a TV program that featured two young girls as dolphin trainers. It was like a lightbulb! That’s what I wanted to do, and then over time it became just a dream to work with animals in general. I’m from Edmonton, so I started volunteering at the Edmonton Valley Zoo after high school, and the started working at West Edmonton Mall for Marine Life. During that time I also started my studies, and took a Bachelor of Science in Animal Biology at the University of Alberta.”

A: “I started with the Calgary Zoo in March of 2012. I had been working with Marine Life in Edmonton and had experience with their sea lions and their African penguins, so when I heard about the new Penguin Plunge exhibit at the Calgary Zoo, I thought that I should apply. Not only did I want to work for the zoo, but I thought my experience might allow me to work in that new exhibit. Luckily, it did!”

A: “Definitely have a soft spot for the penguins! I’ve worked with them for so long, and I love them. My favourite penguin species is the Humboldt, but I have a favourite penguin from each of the Calgary Zoo’s penguin species (the zoo has Humboldts, two types of rockhoppers, gentoos and king penguins). They are: Pedro (Humboldt), Tut (king), Scarlett (rockhopper), and Una (gentoo). I love Una because she’s very curious, and always wants to come up to the keepers and see what’s going on.

I do have to say, as you work here and move through the different sections, you fall in love with all of the different species. There’s something special about each one of them.”

A: “One of the most memorable moments that stand out to me is when Una, our first gentoo chick, pipped. Pipping is when a bird first cracks the shell of its egg, and starts the hatching process. It was right after the 2013 flood, and the rest of the keepers and I were ecstatic- it was not only the first gentoo chick, but the first chick for the Calgary Zoo! I remember standing on the beach, just waiting for it to hatch. All of the keepers had their cameras out to capture the first feed, and it was all so exciting to witness. That’s mainly what I remember- just how thrilled we all were to be the ones to witness it. “

If you missed it earlier this year, Kayla helped film a fun video with our kings during our Penguin Walk! Check out the footage here: https://po.st/o8kK1R