It’s National Zoo Keeper Week and we’re sharing the love! To recognize the dedication and hard work of our amazing zookeepers, we are posting an interview of a keeper each day this week. Our final spotlight is on Paula, whose experience on her family farm growing up made a transition to zookeeping a natural fit.

A:  “I have been working with animals all of my life. I started on our family farm and am now at the Calgary Zoo.” 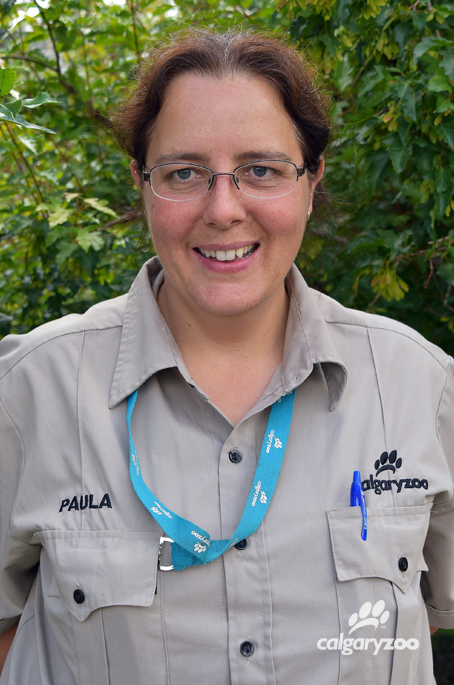 Meet Paula Kerr, one of the featured keepers during National Zoo Keeper Week 2016.

A:  “I started working as a zookeeper in 2007, but have been working at the zoo for 19 years now in different areas.”

A: “I don’t have a favourite animal. They are all so unique in their own way.”

The zoo’s youngest tiger, Kira, relaxing in one of the tiger building’s indoor bedrooms.

A: “One of my greatest joys of this job is being able to say “look at our baby and see what our little one can do!” We were keeping an eye on our recent red panda cub, Usha, and noticed that she was attempting to cross a branch- for the first time ever. Public and keepers all stood around holding their breath until our little one made it across safely. I had never heard the amount of cheering and clapping from all that witnessed this adorable event.”

2015’s red panda cub, Usha, was caught climbing for the first time on a zookeeper’s phone.

Thank you for joining us for National Zoo Keeper Week 2016! Check out our blog to see videos of a different zookeeper each day from July 17-23, 2016.