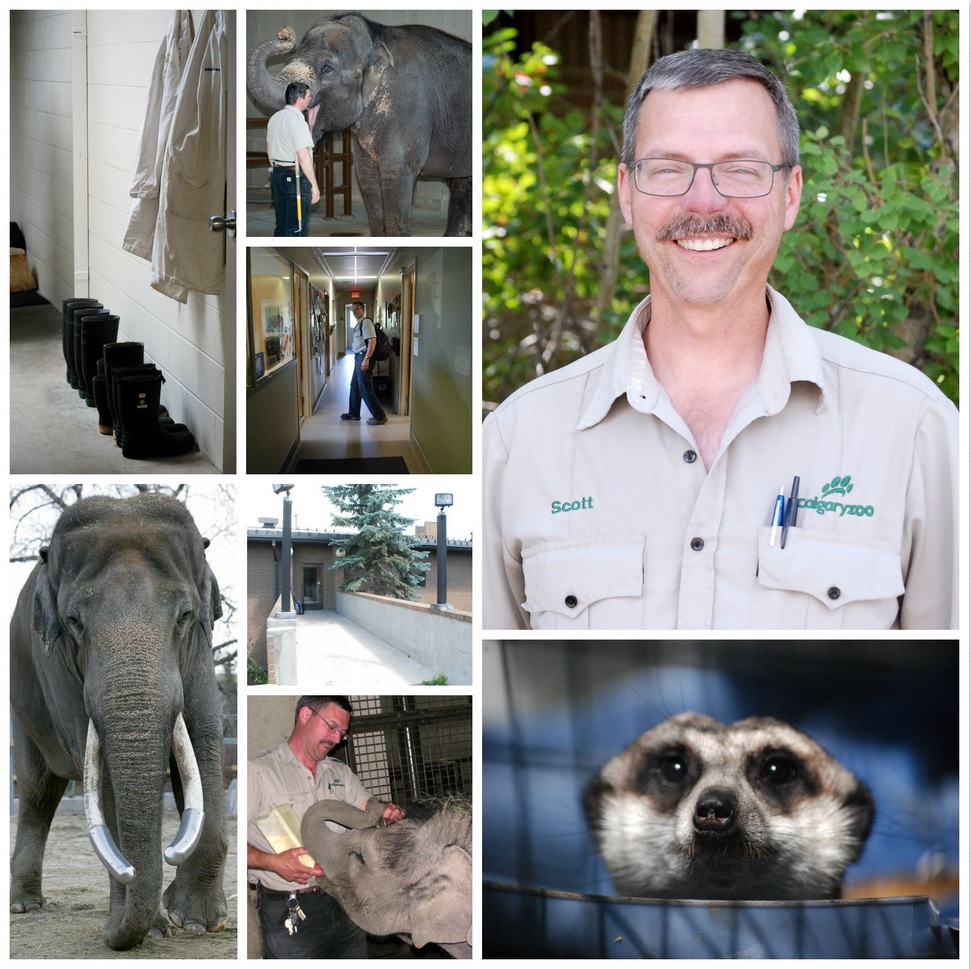 It’s National Zoo Keeper Week and we’re sharing the love! To recognize the dedication and hard work of our amazing zookeepers, we are posting an interview of a keeper each day this week. Scott worked for over 10 years with elephants, and shares his fond memories with us.

A: “I’ve always liked animals- my family had pets when I was a kid because I was always bringing them home! However, I sort of fell into being a zookeeper as a profession. I studied Zoology at the University of Calgary, but even then I didn’t know if I wanted to be zookeeper. I applied to the zoo position because my girlfriend at the time (now my wife) noticed the job posting and encouraged me to apply. She reminded me that whenever we travelled, the first thing that I wanted to do was visit the local zoo.”

A: “I started with the Calgary Zoo in 1988 as a zoo laborer- that’s what an entry level zookeeper was called at that time. After working as a laborer, you took a four year apprenticeship in order to earn your certificate in Public Zookeeping. During the apprenticeship you took classes while you worked at the zoo, and after you worked each section, you had to pass those particular written and oral exams. After working at the zoo for almost 30 years, I’ve gained a lot of experience- I worked with elephants for over a decade. Today specifically I’m working in the Animal Health Centre, and it’s really interesting because I could be working with any of our animals at any given moment. There’s a lot of variety, and you never know what the day’s going to be like. ”

A: “It’s for sure the elephant (The Calgary Zoo had elephants on and off from 1959-2014). I worked with them for about 13 years, and they’re just so different from any other animal that you’ll ever work with, no matter what setting, wild or in captivity. They are incredibly intelligent, but also incredibly gentle and each have distinct personalities. Smartest animal on four legs! Spike (full name Ganesha) was my favourite in particular because for a bull elephant, he was so attentive. He had the most amazing disposition. He would almost always listen, even when he was in musth (male breeding cycle).

Once he needed several foot procedures, and he would always let us clean the foot, even when it hurt him. He was very patient and willing to learn. In fact, you were being taught by him as often as he was learning from you. If he didn’t like something we did, he would patiently wait until we tried it a new way- a successful way. He showed us what he liked. When he moved to Busch Gardens Tampa we told his new keepers that they would fall in love with him, and they did.”

A: “There are so many! I have a lot of great elephant stories.

One fond memory is of our last calf Malti. We were giving her a wash and she grabbed the hose from us and returned the favour! It was her personal mission to get us wet as well. It was so sad we when we lost her, because she was very mischievous and a lot of fun.

I have another one – in our old elephant building, there used to be fans on the ceiling. One day, the smallest female elephant, Swarna, was playing with a good sized log. As she played, she looked up, saw the fan, paused and then hurled the log at it. Just nailed it! Knocked it right down. That fan had to join something we called the ‘elephant art collection’- things that they destroyed. Once it fell down she went right over to it to check out her handiwork. She looked very pleased with herself!”