Celebrate the Month of Love at the Zoo - February Events

END_OF_DOCUMENT_TOKEN_TO_BE_REPLACED

In the months before Christmas, we started to notice some big changes in Radish, one of our beloved red-fronted lemurs. Radish is 29-years old, which means that she is in her “golden” years as a red-fronted lemur. Although she was still active in her environment, moving around and eating with her family group, Animal Care staff noticed that she seemed to have increasing difficulty seeing objects and shapes close to her.

The Calgary Zoo’s Veterinary medical team had been noticing changes Radish’s eyes over the past couple of years during her regular exams. A thorough medical exam revealed what we feared – the cataracts in Radish’s eyes had matured, making it nearly impossible to see anything in front of her or enjoy doing all the usual things lemurs like to do.

While cataracts aren’t common in lemurs, they can occur in geriatric mammals. The medical team consulted with their local veterinary ophthalmologist (animal eye doctor) to plan for the best way to help Radish. They knew that operating on Radish’s eyes would be a challenge, but the post-operative care was going to be even more tricky. Anticipating this, the Animal Care team developed a training plan that would allow Radish to voluntarily participate in her own health care and recovery. Over several months, Radish was trained to accept eye drops multiple times daily in exchange for delicious treats - like banana!

At last, she was ready for surgery! The big day came late in October when the local veterinary ophthalmologist did the delicate surgery to remove the mature cataracts from her eyes. The surgery was an overwhelming success and Radish was returned to her family group the very same day. However, the Animal Care and Veterinary teams knew they weren’t over the biggest hurdle yet. Would Radish choose to participate in her eye drop training plan, as she had before? Would she be part of her own care so she could get better?

The team faced a few challenges in the days following the surgery. Radish had been through a big procedure, and while her eyesight was certainly improved her vision was still blurry. Animal Care staff patiently persevered and encouraged her to participate in her recovery - eye drops three times daily and oral medications. After a few modifications to her treatment, and a lot of convincing with bananas - Radish started to progress quickly in her recovery!

As the days and weeks passed, Radish’s eyes healed rapidly. She started navigating her habitat again, slowly at first and then with more confidence; moving from her favourite spots to exploring the entire exhibit. The Veterinary and Animal Care teams have been thrilled by her quick and complete recovery - and are overjoyed to have Radish enjoying such an increase in her activity level and love of foraging for treats.

After such a hard year, it’s been such a gift for the Calgary Zoo team to watch Radish return to enjoying all the things lemurs enjoy. 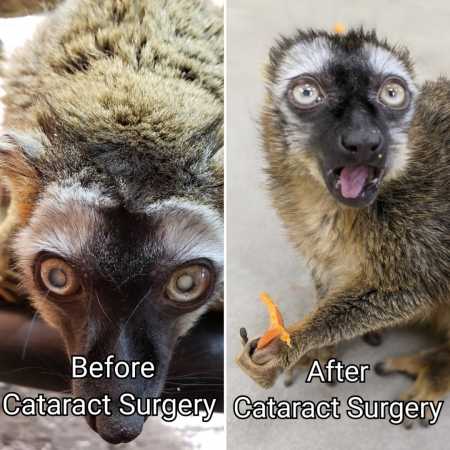